Back in December I did not post after the sad circumstances with Nick’s father’s passing. Read more here

But, we did have a few adventures as a family. I feel like enough time had passed that I can reveal the happy time that we all had during the sadness of the month of December.

We took the boys with us to Indiana to attend the funeral. Indiana had a pleasant surprise for the boys – snow! Where we live in Tennessee (all the boys have ever known) it doesn’t snow much and if it should, there are such small amounts of it that it melts away by the next day. Travel may be stopped or slowed for a few hours, but really life simply goes on. When we crossed over the state line into Indiana, the boys looked up from their electronic devices and saw the main highway was covered in a lovely white/muddy substance. Our oldest even commented on the speed we had slowed to and had to receive an explanation about how snow affects driving habits and the dangers we could possibly be facing. Our youngest had one thing on his mind and kept asking if he could play in it when we got to the hotel 🙂

They were so overwhelmed by the white stuff everywhere (snow) that it consumed their every thought and desire. I heard them reminding each other that they should remember that we were heading to a funeral, but the excitement in their voices led me to think that this was going to be an adventure for them for sure!

After the funeral we went back to the hotel and gathered our thoughts. Nick told the boys (still wearing shorts from habit of Tennessee climate) to dress warmly because he was going to take them somewhere.

We found ourselves at the Circle Center Mall. We walked up and down dizzying heights from bottom floor to top as we marveled at all the stores. The boys tasted their first ever Orange Julius drinks and were mesmerized by the game room on the top level. 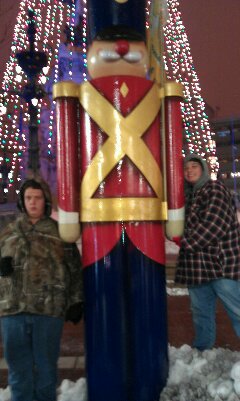 They walked downtown around Monument Circle and looked at the World’s largest Christmas tree. 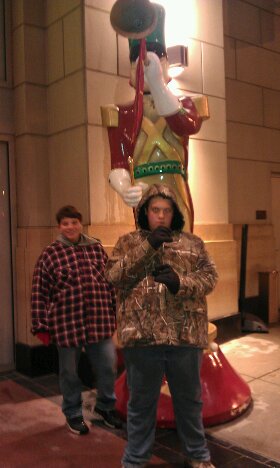 On the way home, Nick stopped at a small store and purchased some small sleds for the boys. He took us to Brown County Indiana and selected a hill for the boys to learn how to sled on.

The youngest loved it! 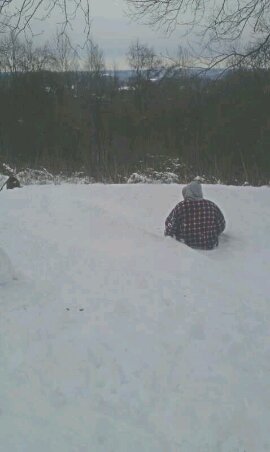 Even Nick had some fun 🙂

The oldest set out to build himself a snowman 🙂

The snow is all they talked about on the long trip back home to Tennessee. They truly had a great experience in their still young teenage lives that many kids have by the time they are 6 or 7 yrs old!

Their adventure was unbelievable wonderful and I know they will never forget it.